Home > Blog > How to Save Money When Paying Your Factory – Goodbye Bank Wire Fees!

How to Save Money When Paying Your Factory - Goodbye Bank Wire Fees! 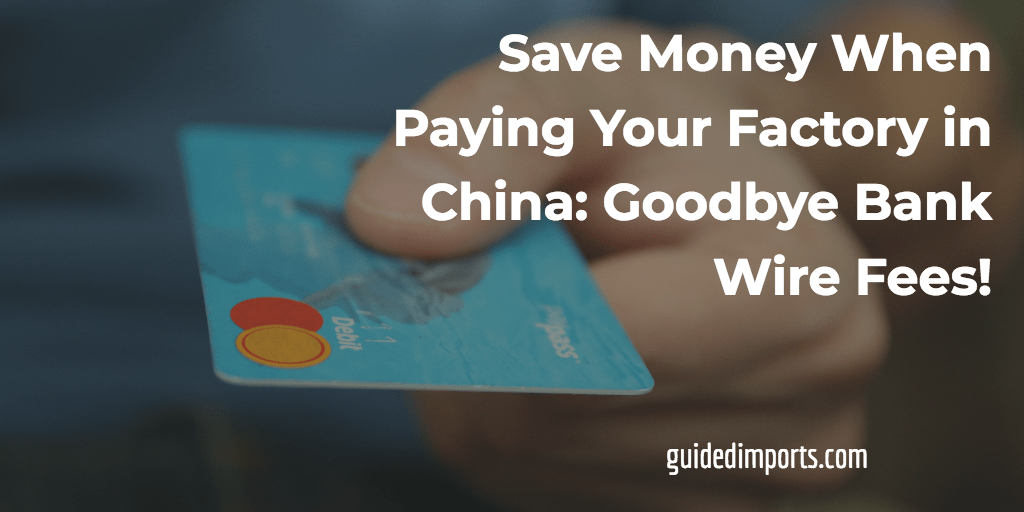 When you want to transfer money to China, there are always associated costs. In this post, I detail my quest to find the safest, most reliable and least expensive method.
I have spent over $50,000 testing different services that assist with transferring and converting money to pay Chinese companies. I’ve reviewed the top choices in this industry below and detailed all associated costs in an effort to save you money the next time you pay your factory.
Ten years ago, businesses simply cut checks. Specialized software and blank checks had to be purchased to facilitate business to business (B2B) payment processing. Today, we rely on electronic invoices that accept credit cards, and our websites easily integrate with credit card processing plugins like Stripe and PayPal. We split bills with our friends using Venmo, Apple Pay and Android Pay, yet when it comes time to pay for products we are still sending bank wire transfers.

Why is it that whenever innovation blankets society, offshore manufacturing is one of the only sectors that refuse to adapt? I’ve been living here in China the past 5 years and each year I make an annual trip home to the US to visit family and conduct business meetings. Inevitably, every year I set up meetings with every bank within a 50-mile radius of my home with one mission; find the one bank which offers the least expensive international wire transfer rates.
Our first bank charged us $80 for a wire transfer and had a horrible exchange rate, the next was $60 with the same terrible exchange rate, and our current bank charges $32 per transfer and also does not have a fair exchange rate. It was not uncommon for us to spend between $500 and $1,500 a month on bank wire fees, and I am still afraid to calculate how much we lost through the horrible exchange rates we were paying.
Getting back to my original question: why are we still relying on banks to send money from one currency to another when they are so expensive? Case in point: There was more than one instance when it would have cost less money for me to pay a courier to hand-deliver cash from America to the Chinese factory than what it cost for me to send the bank wire! That’s when I finally snapped.
We have tried a variety of services that offer better rates than banks. The journey up until now has been a long, expensive road. Since all of our clients, and virtually all of our readers, either send money to Chinese factories or will be sending money soon, I wanted to share my opinion on six of the services we’ve used in the past to convert and transfer funds from USD into CNY.
Banks: Wells Fargo, Bank of America, PNC Bank
Forgive me as I clump these greedy institutions into a single, short paragraph. As I mentioned before, like most banks, they charge an arm and a leg to send the money, and then they make their profit through the exchange rates that they offer. Each time we sent money that was over $15,000, we paid over $1,000 in fees and exchange rates. Think about this, over $2,000 just to send $25,000 to a factory. Less than ideal, bordering on highway robbery!
OFX.com
Their process is relatively simple. Setup an account, tell them how much you would like to spend. Then, after you input the recipient’s information you are instructed to send an ACH transfer to their account. Sending them money takes about a day, then they send the funds the next day. While this sounds like it should be a two-day turnaround, it was more like four in our experience. OFX does not charge a fee for their service, rather they make money off the exchange rate. Their rate is much better than banks, but not close the best available.
Transferwise.com
Last year we were introduced to a company called Transferwise. They were our go-to choice when paying individuals outside of the US since we could send USD and the recipient could receive their local currency at a rate that costs much less than paying a bank. They can offer excellent rates by holding funds in accounts all over the world, in multiple currencies, so they can receive your money in the country you are sending from, and transfer the appropriate funds to the recipient from their local country in their local currency.
This company has proved great when paying individuals, and the best when paying individuals in European countries. Up until a few months ago, we could not use them to send money to businesses in China. While they have recently added this functionality, it is not as simple as sending money to other countries and requires the recipient to have an account with a specific bank in China.
Transferwise was a satisfactory start, and we’ve welcomed it with open arms as it has saved us from paying a bank to transfer funds to multiple accounts. When it works, it’s great. However, it has been less than reliable, and their prices are higher than other options.
Veem.com - The Answer Guided Imports AND our Clients Have Been Looking for!

We just started using Veem, and I think it is safe to say, my search is over. Aside from being nationally recognized and featured by industry giants like Forbes, The New York Times, Tech Crunch, and Quicken, Veem is the only company I have found that specializes in sending money to China. Using them requires both the sender and receiver to set up an account, which would be an issue, except they have a team in China to field factory questions. The factories we’ve worked with who have signed up have all been surprisingly happy to take the extra steps to create their account. Once both parties are signed up, sending money is very simple.

Veem is another company that does not charge a fee to transfer funds, rather, they make money off the exchange rate. The biggest difference between them and TransferWise and OFX: they are not the least bit greedy. Their exchange rates are surprisingly close to the market rate, which is incredible, and their average turnaround time has been about one business day.

More reasons we love Veem
The Proof is in the Pudding
The average amount our clients send to factories in a single transfer is $25,000. So I wanted to use this number to compare the rates of some of the services I mentioned above. Below is a table that illustrates the exchange rates and defines the total cost of each service.
Conclusion
I’ve always felt bad when people email me and ask what the best method for factory payments is, and I was forced to point them towards their greedy, slow, old-school bank transfer.

After some of my clients and my business had the opportunity to test Veem, I took some additional time to chat with the team at Veem to learn more. After a dozen emails and a couple of phone calls, I was convinced they were going to be the service we would recommend when clients are looking to save money and transfer funds overseas.

The bottom line is this: We highly recommend signing up for Veem to help you save money when paying your factories. We will take care of signing up your factory and the team over at Veem is always available if you have questions.